We are running out of space,

We are running out of space, and the only places to go to are other worlds.

Theoretical physicist Stephen Hawking has set a deadline for humanity to save itself. 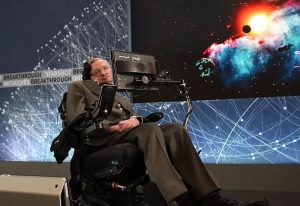 Published by: Futurism.com, Vox.com and bbc.com. Jun 21, 2017, 6:00am EDT.
Speaking at the Starmus Festival in Trondheim, Norway on Tuesday, Hawking reiterated his point.

Theoretical physicist Stephen Hawking has set a deadline for humanity to save itself. Within the next 100 years, he warns, we need to colonize Mars and other planets. If we don’t, we may not survive climate change, disease, and other versions of doom we’re bound to inflict on ourselves this century.

Hawking’s pessimistic take on humanity isn’t new. But the super-famous scientist and author has been making the case more urgently in advance of the release of his new BBC documentary, Expedition New Earth, this summer.

And President Trump’s decision to pull the United States out of the Paris climate agreement on June 1 has only upped the stakes, Hawking said in a talk delivered by Skype at the Starmus science and art festival on Tuesday.

“Unlike Donald Trump, who may just have taken the most serious and wrong decision on climate this world has seen, I am arguing for the future of humanity and a long-term strategy to achieve this,” Hawking, now 75 and still a professor at the University of Cambridge, said.

“We have given our planet the disastrous gift of climate change … When we have reached similar crises, there has usually been somewhere else to colonize … But there is no new world, no utopia around the corner,” he said. “We are running out of space, and the only places to go to are other worlds.”

If you share Hawking’s faith in the human imagination and drive to explore, this may have some appeal. What if we could rekindle the excitement of the early days of space travel in the 1960s and build a new space program to send anyone who wanted to go?

Hawking has some concrete goals to guide us going forward. If we’re going to make his timeline for building new civilizations before we perish, here’s what we need to do, he says:

If these ideas sound familiar, it’s because billionaires like Elon Musk and Richard Branson, who are deeply invested in spaceflight, have been pushing them too. Some of Hawking’s fellow physicists and astronomers also agree we could use an exit strategy. And there’s now a small but growing community of aspiring space colonists prepping for life on Mars. (To be clear, Mars, for now, looks like a pretty deadly place.)

Last year, as Vox’s Brian Resnick reported, Hawking, along with a Russian billionaire and Facebook’s Mark Zuckerberg, concocted a scheme to build and send spacecraft the size of postage stamps to Alpha Centauri, the second-closest star to Earth, some 4.37 light-years away.

The plan, called Breakthrough Star-shot, is ambitious, to say the least. A huge number of engineering hurdles would need to be cleared over the next couple of decades to make a launch possible. And it’s just a tiny example of what we’d need to actually decamp to other planets and the moon.